Preface to the Second Edition

Screw the government! — Legends of the Fall
Screw the middle class! — Evita

Like most of my books, this text emerged only partly from my conscious design and partly from suspicious accidents. It actually began as a Ph.D. dissertation called “The Evolution of Neuro-Sociological Circuits: A Contribution to the Sociobiology of Consciousness,” which I wrote in 1978-79 for an alternative university called Paideia. At that time, Paideia ranked as State Approved, the highest rating given to alternative universities in California, where we have alternatives to everything and the state feels required to classify the alternatives on a scale of “experimental” to totally bonkers. Alas, Paideia, having achieved relative respectability as an “alternative,” later joined with a much more radical and Utopian outfit, Hawthorn University, and lost its top rank among counter-culture educational contraptions in California, falling from Approved to Authorized, a much lower rating. The whole megilla then joined into several flakey outfits loosely allied, none of which were recognized at all by the state, which suited the new honchos perfectly, since they did not recognize the state either.

In Ireland in 1982, stuck with a dissertation which I liked a lot and a Ph.D. diploma which, due to the collapse of Paideia, looked less impressive, I decided to rewrite the manuscript in more commercial form. The first change consisted of removing all the footnotes (about two of them per sentence) which gave the original a truly academic stink but would annoy the average reader. Then I expressed myself a little more bluntly (and perhaps snidely) in many places, adding much to the humor and nothing to the good taste. I also wrote a few more chapters, created all the exercizes, and sketched out diagrams for the illustrations. 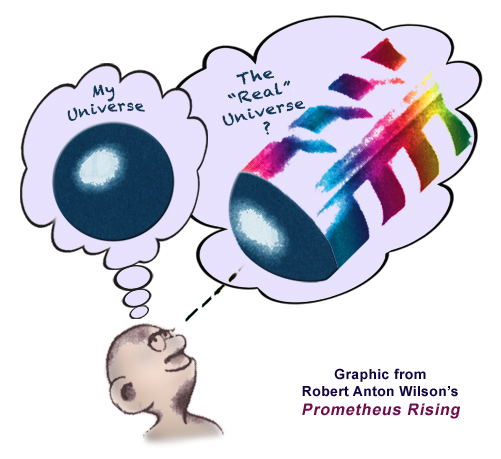 I then, with craft and cunning, removed most of the references to Dr. Timothy Leary from the early parts of the book and only let his name begin to appear frequently after about the middle. I had good reason, based on experience, to feel rather strongly that, just as Dr. Tim was blacklisted by Establishment publishers at that time, any book openly and blatantly based largely on his ideas would also get thrown in the junk heap. I thought I now had a “popular” book, and maybe I almost did. The first publisher to whom I submitted it, Jeremy Tarcher, held it for a full year of meditation before rejecting it; his only explanation for the rejection concerned the mixture of technolo-gese and “counter culture” slang that has since become my most frequent style in nonfiction. (It’s based on the way I actually speak.) When I tried Falcon next, they accepted it within 48 hours, and I received the advance check within the next 48 hours. “Oh frabjous day!”

A month later, I heard from Tarcher again: he had changed his mind and decided he wanted the book after all. I was in one of my periods of acute poverty then (something that happens periodically to all freelance writers) and it was with great effort that I refrained from telling Mr. Tarcher to go fuck himself. I just told him I had a contract with another publisher.

With Falcon as publisher, I then inserted the acknowledgments page, giving Leary the credit he deserved right up front, and added a dedication to him. Falcon, as I expected, did not object. Falcon has always served as an alternative to Establishment publishing, just as Paideia once served as a similar alternative to the academic Establishment.

Prometheus was one of Falcon’s first books and, I think, the first done with computerized typesetting; as usual with such pioneering efforts, it emerged with a phalanx of typos that have embarrassed me considerably over the years. (When the San Francisco Chronicle first computerized they had similar problems. I remember one story in which the Chief of Police, denouncing drugs, rambled off into a sentence about the thrill of meeting Mickey Mouse and Goofy. I assume that line came from another story but it made the Chief sound as if he had gotten into some weird chemicals himself.) In this edition, I have corrected these errors, where I could find them; I know too much now to think I found all of them. (Wilson’s Tenth Law: no matter how many times a writer proofs a book, hostile critics will always find at least one error that he missed.)

I have also updated every place where I thought updating seemed necessary. I even added a few new ideas (which, of course, seem brilliant to me just because they are new) and some new jokes and generally gave the text a badly-needed face-lift. It is still one of my favorite books, and seems to rank high in the estimation of most of my fans.

In Germany-Switzerland-Austria in the late 1980s, three German versions existed simultaneously—a deluxe edition from Sphinx Verlag of Zurich, a mass-market paperback from Rowalt Verlag of Hamburg, and an even cheaper pirate edition from the busy troglodytes of the unterwelt. The last, of course, paid no royalties but, by indicating that I had three audiences at three economic levels, persuaded me feel like a very popular writer in Mitteleuropa.

As I contemplate this tenth printing of a “far out” or “freaked out” book that began its career back in 1978, I feel only mildly embarrassed by the predictions that proved over-optimistic. (I have revised them, of course, in keeping with my current knowledge and best guesses). I feel much more astonished, and pleased, that many of the predictions now seem much less shocking than when I first published them. Indeed, the wildest and most “Utopian” future-scans in here are precisely the ones that have had the greatest scientific support in the 1990s. To see two decades ahead, even in a few areas, counts as some sort of success in the Futurism game. And every bulletin from the embattled MIR space station reminds me that if my space forecasts projected “too much too soon,” part of what I expected does in fact already exist and the rest is obviously evolving.

I feel more chagrined about my lyrical evocation of Intelligence Intensification. In the 1970s, I simply did not recognize the extent to which the 1960s “youth revolution” had terrified our ruling Elite, or that they would try to prevent future upsurges of radical Utopianism by deliberately “dumbing down” the educational system. What they have produced, the so-called Generation X, must rank as not only the most ignorant but also the most paranoid and depressive kids ever to infest our Republic. I agree with outlaw radio star Travis Hipp that the paranoia and depression result inevitably from the ignorance. These kids not only don’t know anything; they don’t even want to know. They only realize, vaguely, that somebody has screwed them out of something, but they don’t have enough zest or bile to try to find out who screwed them and what they were screwed out of. Fortunately, this Age of Stupidity cannot last very long. Already, most people know that if you want a good TV or VCR, you buy Japanese; for a good car, Japanese or German, etc. Eventually, in order to compete, the Elite will have to allow a bit more education for American youth, before we sink fully to the level of a Third World nation.

The other day I saw a film called The Edge, which I regarded as the best thing to come out of Hollywood since The Silence of the Lambs. Perhaps not coincidentally, this flic also starred Anthony Hopkins. In one scene, Hopkins and his co-star, Alec Baldwin, seem in an absolutely hopeless situation, lost in the Arctic, stalked by a hungry bear, without weapons, seemingly doomed. Baldwin collapses, and Hopkins has a magnificent monologue, talking Baldwin out of his despair. The speech runs, roughly, like this: “Did you know you can make fire out of ice? You can, you know. Fire out of ice. Think about it. Fire out of ice. Think. Think.”

This riddle has both a pragmatic and symbolic (alchemical) answer. The pragmatic answer you can find in the film, explicitly; and it might prove useful if you ever get lost in the north woods; and the alchemical, or Zen Buddhist, answer is also in the film, implicitly, and only perceptible to those who understand the dense character Hopkins plays in the story. It might prove useful whenever despair seems to overwhelm you. So, to those who at the end of this book still can’t understand or sympathize with my Nietzschean yea-saying, I quote again: “Fire out of ice. Think. Think.”

Who was that Prometheus guy and why did he give us fire in the first place? 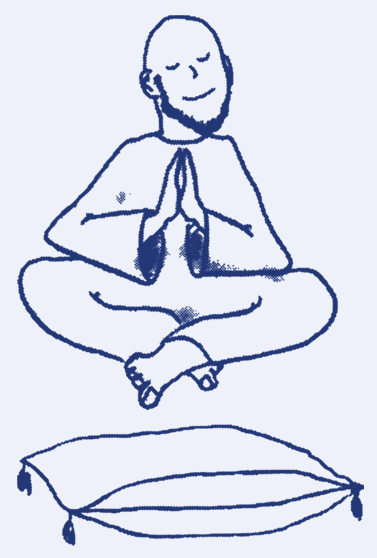