Most of the domesticated primates of Terra did not know they were primates. They thought they were something apart from and “superior” to the rest of the planet….

Benny had actually read Darwin once, in college a long time ago, and had heard of sciences like ethology and ecology, but the facts of evolution had never really registered on him. He never thought of himself as a primate. He never realized his friends and associates were primates. Above all, he never understood that the alpha males of Unistat were typical leaders of primate bands. As a result of this inability to see the obvious, Benny was constantly alarmed and terrified by the behavior of himself, his friends and associates and especially the alpha males of the pack. Since he didn’t know it was ordinary primate behavior, it seemed just awful to him.

Since a great deal of primate behavior was considered just awful, most of the domesticated primates spent most of their time trying to conceal what they were doing.

Those who got caught were called no-good shits.

This metaphor was deep in primate psychology because primates mark their territories with excretions, and sometimes they threw excretions at each other when disputing over territories.

In that universe, not just civilization, but all life on Terra, came to a very hideous end in 1984, because the President was constipated one day and made the wrong decision. Their technology was so advanced that half the solar system went nova along with the Earth.

In the next universe Simon explored, we were saved because a red-haired Tantric Engineer named Babs Lashtal gave the Prez a first-class Grade-A blow job in the Oval Office at 10 a.m., relaxed his tense muscles, pacified his glands, soothed his frustrations, and inspired him to act relatively sane for the rest of the day. He did not push the button, thereby preserving millions of species of living forms on Earth and thousands of microscopic species on Venus.

Babs Lashtal, of course, was regarded with contempt by all right-thinking people, who had no idea that they owed their lives to her skillful extraction of presidential spermatozoa by means of tender, gentle, gracefully rhythmic kissing, licking, and sucking of the presidential wand.

Even if they had known about it, the right-thinking people would still say Babs should be ashamed of herself.

The whole novel was rather didactic, Simon decided. It was written only to prove a point: Never underestimate the importance of a blow job. 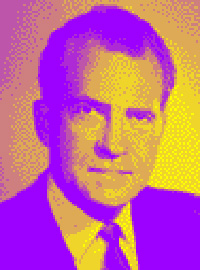 There was another President of Unistat who resigned, actually, but he “only” (as they say) existed in a novel. This was a science-fiction thriller set in a parallel universe and was called Wigner’s Friend. It was about the worst possible President the author, a Harvard professor named Leary, could imagine.

The President in Leary’s book, called Noxin, was a monster. He got the country into totally unnecessary wars without the consent, and sometimes even without the knowledge, of Congress. He lied all the time, compulsively, even when it wasn’t necessary. He put wiretaps on everybody — even on himself. (Leary, a psychologist, claimed this bizarre fantasy, which smacked of satire, was possible, for a certain type of paranoid mind.) He used the FBI and the IRS to harass every citizen who resisted this tyranny. He not only took bribes, but even had a team of enforcers who extorted “campaign” money from corporations under the threat of turning the IRS on them. His political enemies all died in a series of strange assassinations that couldn’t be explained. When Congress started investigating his crimes, he betrayed his co-conspirators one by one.

Noxin even misappropriated government money to fix up his house, and cheated on his income tax.

The book was a runaway best-seller, because it had a taut, suspenseful plot and because the Unistaters could congratulate themselves on not being dumb enough to ever elect such a President.