• The best way to search for Higher Intelligence is to
1. find the right religion
2. support Carl Sagan’s Project Cyclops, which is searching for radio signals from advanced civilizations in the galaxy;
3. investigate UFO’s
4. research our own nervous system
5. build a starship and go looking.

It only takes 20 years for a liberal to become a conservative without changing a single idea. In an evolving universe, who stands still moves backwards.

CD: How seriously are we to take your fascinating and entertaining trilogy, Illuminatus!, which you wrote in collaboration with Robert J. Shea?

Wilson: I would hate to be taken seriously. Serious people are always so grim and uptight that they make me want to dance naked on the lawn playing a flute. Of course, as Mavis says in the first volume of the trilogy, nothing is true unless it makes you laugh, but you don’t really understand it until it makes you cry. The basic situation of humanity is both tragic and comic, since we are all domesticated apes with marvelous 30-billion-cell brains, which we seldom use efficiently because of domination by the older mammalian parts of the back brain. I mean, we’re living on the Planet of the Apes, man. Is that funny or serious? It depends on how broad your sense of humor is, I guess.

CD: Specifically, are we really to believe that competing secret societies initiate and guide the various intellectual, religious, artistic, and mind-warping trends of the world? Or was the secret-society scenario just a parody of right-wing theories, a way of dramatizing authoritarian vs. libertarian trends, or simply your own brainwashing technique? 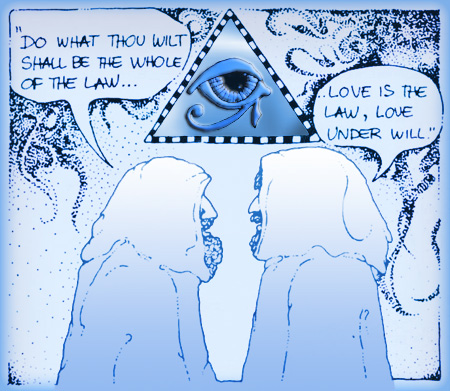 Wilson: To quote Lichtenberg, “This book is a mirror. When a monkey looks in, no philosopher looks out.” Illuminatus!, like Linda Lovelace, is all things to all men. It’s the first novel deliberately written from the viewpoint of the multi-model agnosticism of modern quantum physics. The novelist sitting on a pedestal watching the world with the allegedly Objective Eye of God is as obsolete as the tinhorn preacher bawling, “Come to my church, I’ve got the true true religion.” The only philosophy one can honestly embrace at this stage of evolution is agnosticism, or ontological pluralism. The mosaic of competing conspiracies in Illuminatus! is a parody of popular demonology on both Right and Left. It’s also a serious proposal for a more Einsteinian, relativistic model than the monistic Newtonian theories most conspiracy buffs favor. One of the readers who really seems to have understood Illuminatus! is Dr. Timothy Leary, who told me last year that his experiences with the DEA, FBI, CIA, PLO, Weather Underground, Mansonoids, Aryan Brotherhood, Al Fattah, etc., were precisely like the most absurd parts of Illuminatus!. Tim says you meet the same 24 conspiracies wherever you go. Specifically, he mentioned that he identified the same 24 paleolithic gangs fighting over the turf in Folsom Prison that he had recognized at Harvard University. The ones at Harvard speak better English, of course….

I see the power game resting on three levels of force and fraud. First, earliest and still most powerful is the government racket itself, the monopoly on force (military power, police power, etc.) which allows the governing group to take tribute (taxation) from the enslaved or deluded masses. Second, derivative from this primordial conquest, is the landlord racket, the mammalian monopoly on territory which allows the king’s relations (lords-of-the-land) or their successors, today’s “land-lords,” to take tribute (rent) from those who live within the territory. Rent is the daughter of taxation; the second degree of the same racket. Third, the latest in historical time, is the usury racket, the monopoly on the issue of currency which allows the money lords to take tribute (interest) on the creation of money or credit, and on the continuous circulation of the money or credit every step of the way. Interest is the son of rent, the rent of money. Since most people engaged in nefarious practices are, in my opinion, very loathe to acknowledge what they are doing, and are addicted to the same hypocrisies as the rest of humanity, I think all power groups quite sincerely believe that what they are doing is proper, and that anybody who attacks them is a revolutionary nut. Outside of the Klingons on Star Trek, I have never encountered a real predator who justifies himself on Stirnerite or Machiavellian grounds. I really think Saroyan was right, naive as it sounds, in saying that “every man is a good man in his own eyes.”

The difference between Conspiracy Digest and myself is that CD defines the Power Elite as somebody else. I always define the Power Elite as myself and my friends. CD and I are in basic agreement that certain kinds of power are vested in (a) those who monopolize weaponry, i.e. governments, (b) those who monopolize land, i.e. landlords, and (c) those who monopolize currency, i.e. banks of issue. We disagree in that CD regards these traditional monopolies as possessing the only kinds of power that matters on this planet; and I recognize another kind of power, Brain Power. Brain power (the work of all artists, scientists, and symbolizers since the dawn of humanity, but particularly those of the Nineteenth Century) created the “real world” over which monopolists fight each other in the Twentieth Century. Similarly, Brain power right now, today, is creating the “real world” of the Twenty-First Century, over which the monopolies will then be struggling. The Brain people create the realities over which the Power people fight each other, and the Brain people even create the techniques of the fight…

Less than thirty years ago it was believed by many intellectuals
that the United States was a matriarchy.
The intellectuals who believed this were all males,
but I don’t know any other explanation for them.

Paleopuritanism and Neopuritanism …As psychologist Theodore Schroeder pointed out, “obscenity” is the modern form of “black magic.” Both concepts are operationally meaningless; there is no instrument which, pointed at a book or painting, will tell how much “black magic” or “obscenity” is in it. These things are in the nervous system of the observer. Attributing them to books, art, ideas, etc., in the external world, and seeking to punish the perpetrators, is the same kind of hallucination that produced the witch-hunts in which nine million innocents were killed. Clarification of this issue explains what the Buddhists mean by “maya.” One could lead a group of both old Puritans and new Puritans through a gallery featuring photographs of flowers without any problem arising, even though flowers are the genitals of plants, as everyone who passed Botany 101 knows. However, try to navigate that group through an exhibit of photos of animal genitalia and almost anything could happen, when the emotional imprints are activated. The external stimuli (natural sexuality) are the same, but the imprints are different. Contemplation of this parable should clarify what Buddha meant in saying that most people see only their own “maya” and never experience objective fact at all. Of course, if the exhibit featured human genitalia… a great deal of angry speech about “smut” from the first group and “sexism” from the second would be heard. All of this speech would confuse the internal glandular-emotional emergency imprint with the objective external stimuli, and there would be a desire to punish the photographer.

The brain is the greatest sex organ of all.