Reality Is
What You Can
Get Away With

Screw them! Screw the government!
– Legends of the Fall

Keep your confidence in the Almighty – or whatever makes all the wheels go around..
– The Miracle of Morgan’s Creek

The strange people who have already started looking for Satanism in school books, Rock lyrics, Dungeon-and-dragon games etc. will really wig out when they start to feel the multi-media and Virtual Reality revolutions. The right wing will have nightmares in the late ’90s that will make the 62 Satanism panics of 1982-1993 seem sedate by comparison.

Most intellectuals don’t realize how big those panics grew in most cases, since the accused and accusers all usually came from poor, ignorant and rustic enclaves, and nobody got hanged. But think of it — Every one of these panics in the United States involved more accused “Satanists” and longer hysterias than the Salem witch-hunt of 1692. We think of the Pilgrims as unbalanced because of that single outbreak of mob paranoia, but what must we think of our fellow citizens today who have had 62 such outbreaks in little more than a decade? Think of three Salem witch-hunts per year, extending over 24 States. And remember that, during the same years, hundreds of our citizens had experiences (in other realities….) which they explained as sexual or genetic tampering by Monsters from Outer Space. I only need add that organized bigots still fight a last-ditch battle against Darwin, biology and science in general.

This mass hysteria I see as part of the Future Shock of our accelerated social destabilization as “life as we know it” vanishes and gets replaced more and more by “life as we used to read it in science-fiction.” Naive people have grown terrorized by text books, by pop music, by games, and even by school-teachers (the most inoffensive persons around); accusations of “Satanism” have targeted all of these, as you will see in Dr. Victor’s book. The whole modern (or post-modern) world seems incomprehensible, and therefore sinister, to millions of our citizens.

If you want to grok what these ordinary beer-and-hotdog Americans feel when they see a Gay Pride parade on TV, try to imagine your own reaction to a Cannibal Pride parade. I do not mean that Gays should go “back in the closet,” or that any other genies should or can go back into their bottles. I just mean that the world has begun to freak out a lot of ignorant people, and America has more ignorant people than any other industrial nation, because of certain differences between European and American capitalists.

In general, European capitalists usually have broad educations, keep up with artistic and cultural trends, have long accepted some degree of socialism as inevitable, and believe they can make bigger profits with very well educated workers who understand the science behind the technology they use. American capitalists usually have narrowly specialized educations, no interests beyond profit itself, fear that any degree of socialism will destroy them utterly, and believe they can make bigger profits with an ignorant and docile working class. But, once again, out of the chaos I see us emerging to another (temporary) stability, in which more advances in knowledge and art will occur than at any previous time in history because we now process more information per week than most earlier societies processed in a generation.

NARRATOR: The anal-territorial reality-tunnel has its origin in mammalian ritual. Excreting on a territory is a ritual signal that the territory has been claimed.

CUT TO: NARRATOR walking through stills from Olivier’s HENRY V.

Footage from Welles’ CHIMES AT MIDNIGHT. The armies of Henry IV and the rebels rushing forward into combat.

More footage from CHIMES: dead bodies in the mud.

NARRATOR walking past collage of photos from Vietnam War.

NARRATOR: We all enter this reality-tunnel by age 3 — and most never grow out of it. This new reality-tunnel is again formed by imprinted neurotransmitter networks in the brain. It is called Patriotism.

Footage from Eisenstein’s ALEXANDER NEVSKY. The two armies in panoramic shot rushing to destroy each other.

Third dubbed voice: Anybody got any ludes?

IGNATZ wandering down the dark hall.

A new ACTOR sitting at the TV Announcer desk. He has all the charm and sincerity of a professional TV anchorman. Behind him are front and back sketches of John Kennedy’s body as observed as Parkland General Hospital in Dallas.

ACTOR: This is the neck wound that all the doctors at Parkland Hospital in Dallas identified as the entrance wound. (Points to neck.) It looks like an entrance wound. This is the huge gaping wound in the back of the head (Points to back of head ) that the doctors regarded as the exit wound. It looks like an exit wound. This is what they saw and wrote down and testified, and it indicates the shots came from the front, from the Grassy Knoll.

The crucial sequence of the Zapruder film. Kennedy is hit and his head jerks back, like any man shot from the front.

The TV studio, as before Zapruder insert. The Parkland hospital sketches disappear and are replaced by by two new sketches of the corpse.

ACTOR: These are the sketches of what the doctors at Bethesda Hospital saw later that evening. The wound in the neck has been enlarged, you will note, to make it look like an exit wound. A new wound has been added in the back, between the shoulders, which was not there at Parkland Hospital in Dallas. Look. Do you see the changes? In making these alterations, the whole brain disappeared. It has never been found or its absence explained. All this was necessary to make it look as if the shots were fired from the rear, from the School Book Depository. Now the Mafia couldn’t do this. The pro-Castro Cubans couldn’t do it. The anti-Castro Cubans couldn’t do it. No group of rich right-wingers outside the government could do it. The changes were made while the corpse was in the hands of government agents. And the changes were made immediately, as soon as the corpse was put on Air Force One. Only a group within the government could do this. And the only group in the government with the motive and the means and a history of arranging assassinations was the (slow emphasis) C…I….

DO NOT ADJUST YOUR MIND
IT IS REALITY THAT IS MALFUNCTIONING

NARRATOR standing before TV announcer set. In the background, two men in white are forcibly administering a hyperdermic sedative to the Assassination Buff ACTOR.

NARRATOR: We don’t know how he got in…some wandering nut, obviously….He’ll get the medical attention he needs…

ACTOR, sedated, zombie-like, is dragged off by the men in white.

The unconvincing UFOs from PLAN 9 FROM OUTER SPACE

VOICE #2: Yes. We must not destroy their reality-tunnel too fast. Let there be Slack.

VOICE #3: No goddam anchovies, I said.

Mercator map of the world.

NARRATOR (voice over) The trajectory of human history can be stated in four simple words — Fast Westward, Fast Forward. Those with neophobic imprints — “Oh, Mommy, take me home” — stay in one place, where they were born.

A dot appears over Thailand.

NARRATOR: Those with neophilic imprints — “It’s fun to explore” — keep moving Westward, against the spin of Earth, creating new ideas as they travel. Consider the order of the discovery of the chemical elements — which is one trajectory of the direction and acceleration of human progress…

Each element is represented by a dot lighting up and flashing on the map. They move steadily in an East-to-West direction.

NARRATOR:  In this simulation, one minute equals 6000 years, or one hundred years per second. The first nine elements were discovered in Asia, before the birth of Christ…

We see the dots lighting up.

NARRATOR: Then, faster and faster, the elements were discovered in Europe, moving from South-East to North-West…The Holy Inquisition sort of killed off science in Southern Europe, as you can see…

We see the dots lighting up and clustering in Northern Europe.

NARRATOR: By 1932 we knew all the natural chemical elements. Since then we have created quite a few new elements, all of them in Southern California.

We see the dots moving West to California in the last part of the last second.

Alleged extraterrestrial in gorilla suit with diving helmet (from ROBOT MONSTER.) He is walking across desert. We dub dialogue.

GORILLA: No, there were no little green men for Lee Harvey Oswald. So soft this public nuisance is beginning.

Medium shot. IGNATZ is in a grubby hippie pad, wearing Punk clothes. He has a joint in his mouth and is laying out Tarot cards for a “reading.” Poster of John Lennon on wall behind him.

VOICE: Oh, you know all about Tarot and the Tree of Life and how to get high on Weed. You dig the latest in art and music and film. You’re fuckin’ HIP, baby. But what about the left brain? Do you know anything about that, melon head?

Camera pans around room, highlighting air conditioner and stereo as VOICE drones on in tones of rebuke.

VOICE: How does the Mysterious Stereo function? Why does the mystic Air Conditioner make the air cooler? Have you ever wondered about these things? Are you using only HALF your brain power?

VOICE (still off-screen) What is the Magic Art that allows a super-jet to lift 400 people off the ground and put them down safely over 4000 miles away?

The brain on black background, revolving. 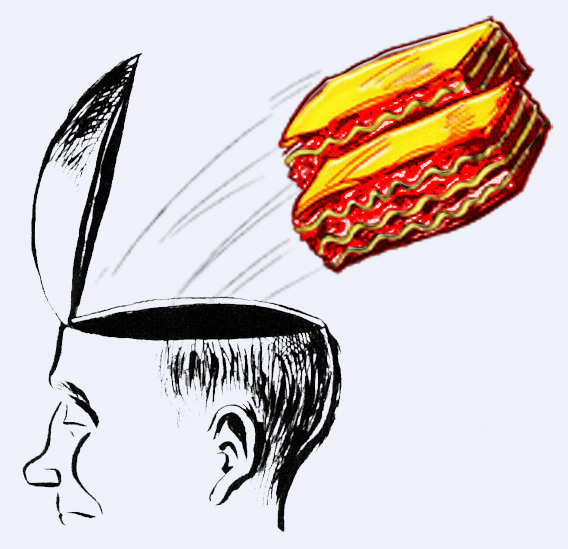 VOICE: The long-hidden secrets of the left brain are known to High Adepts at the Princeton Institute for Advanced Studies. Now they are willing to share their mystic knowledge with nerds like you. Yes, YOU, and any other jerk like you. Now is your chance to learn about the syllogism, which tells when an argument is sound and when it’s just hot air. Or about the equation, which predicts physical events before they happen. Or the Experiment, which shows the secrets of nature stark naked before your gaping moronic eyes. Sign up before it’s too late.

The living room. IGNATZ and BETTY watching the above on TV. In the corner, NARRATOR is reading INFO-PSYCHOLOGY by Dr. Timothy Leary.

BETTY: Gee, I wonder if this stuff is anything like yoga? I hate those bending exercizes…

IGNATZ: Advanced sages… hidden knowledge…Ha! Sounds like bullshit to me.

Reality Is What You Can Get Away With