. . . as Einstein once said –
quoted by Korzybski in Science and Sanity –

In daily life and in “common sense,” we use this agnostic caution most of the time and, “expect the unexpected” and “keep our eyes and ears open,” etc. We only rush to judgement when we are under time-pressure to make a quick decision or when our prejudices are involved, as in political and religious controversy.

When there is no existential pressure for quick decisions, only prejudice asserts certitude.

The following diagram is adopted from Professor O. R. Bontrager of the University of Pennsylvania Department of Psychology and from the general principles in Blake’s anthology, Perception, University of Texas, 1952.

Stage I represents an energy-event in the space-time continuum, in the Einsteinian sense. This can be a sub-atomic process, a horse running in a field, a Laurel and Hardy movie projected on a screen, the nuclear engine called “the sun” transmitting light and heat to us across 93,000,000 miles, or any other kind of event possible in space-time. This is called Etic Reality, or non-verbal Reality.

The first arrow represents part (not all) of the energy in the original energy-event traveling toward some perceptor organ belonging to you or me or some critter like us.

Stage II represents the activity of the perceptor organ after being “hit” or tickled or somehow excited by the part of the energy that reaches said organ. Please note that all of the energy is not absorbed by the organ even in the most extreme cases – e.g. when we are hit by a hammer, we still do not absorb all the energy in the hammer.

The second arrow indicates part of what happens after the perceptor organ is stimulated, by part of the energy flowing to us from the space-time event. In this arrow we are representing very, very many signals traveling to many parts of our organism.

Stage III represents this organismic reaction, which can be quite complex. For instance, if the energy-packet happens to be the signal, “Your mother has been raped and murdered by terrorists,” the stomach and tear-ducts and heart at least will be involved in processing the signal, as well as the neural and neuro-endocrine systems.

Try to imagine, for instance, some of the probable organismic reactions, including bile and adrenalin production, in those Fundamentalist Christians who have been hardy enough to have worked their way through the first few pages of this opus; or in a Feminist confronted with the signal, “No woman has ever written a first-rate symphony,” or in a Marxist listening to a Margaret Thatcher speech; or in a midget reading a collection of midget jokes which are “really” quite funny – to non-midgets; or in a Jewish scholar trying to read objectively through the writings of those Revisionists who claim the Holocaust never happened.

It is obvious that along with subtraction (or abstraction: receiving part not all of the external energy), perception also involves a kind of addition of pre-existing emotions, which is what Freud meant by “projection.”

The next arrow indicates the transmission of all this to the brain. Obviously, what the brain receives is already highly colored by the subtractions and additions we have indicated; but the brain itself, except perhaps in the newborn infant, already has a set of programs, or a “filing system” for classifying such incoming signals.

Stage IV indicates the “percept” as it is usually called, the mental “image” or “idea” that emerges after the brain has processed the original energy plus additions and minus subtractions.

The final, two-way arrow indicates the most subtle and nefarious stage of this neurological programming, the feedback between the incoming energy (plus additions and minus subtractions) and the language system(including symbolic, abstract languages like mathematics) which the brain happens to use habitually.

The final precept in humans is always verbal or symbolic and hence coded into the pre-existing structure of whatever languages or systems the brain has been taught. The process is not one of linear reaction but of synergetic transaction. This finished product is thus a neurosemantic construct, a kind of metaphor.

This discovery that language is basically metaphoric, which emerged gradually in the early 19th Century, inspired Emerson’s famous dictum that we speak to each other in “fossil poems.” Thus, to want something is to be empty – want and vacant come from the same root. Speaking of all desires as “appetites” brings us back to the same metaphor. Even “to be” – the most abstract word in normal use – comes from an Indo-European root which evidently meant becoming lost in the woods. That was as abstract, I guess, as an early human could feel; when no longer lost, when other people were found again, he or she would no longer simply “be” abstractly but become embroiled again in a more complex state, namely social existence and its Game Rules. A villain is a person without property (and Marxists should have given us many more exegeses on the class-bias in our languages). Man is the general human being, as Feminists keep telling us, because of the gender-bias in our language. A humorous story of sexual nature is a “dirty joke” because ascetics and puritans have left their own programs embedded in our speech; but Saxon words for body functions are “dirtier” than Norman words because of a plurality of puritan-economic-racial prejudices.

Even “the” is a metaphor – it assumes the world is divided the same way our minds divide it – and seems to have been a very hypnotic metaphor indeed. In terms of human tragedy and suffering, think of what has been provoked by generalizations about “the Jews” and “the blacks.” More subtly, remember that “the length of the rod” seemed to be a perfectly meaningful and “objective” phrase until Einstein demonstrated that a rod has various lengths — length1, length2, etc – depending on its velocity and depending also on the relative velocity of the galoot who is trying to measure it.

Of course, if some pedantic bastard like me points this out, people will say that the latter formulations are what they really mean and that the Aristotelian “is” was used only for convenience or brevity. But if you observe people carefully, you will note that language does indeed have hypnotic effects, and that one who has said, “This is Sacred” will treat the non-verbal event as if it really is Sacred, and those who say “This is Crap” will act as if the event really is Crap.

This table is three meters long.

In case Dr. Jones’s point still seems obscure or excessive, consider the celebrated “cock-eyed room” designed by Dr. Alber Ames. This is discussed in Blake’s Perception mentioned above and has often been shown on educational television. This room is designed so that the brain, using its ordinary programs and metaphors, will classify it as an ordinary room. It is not ordinary, however: it has walls and ceiling and floor designed at odd angles which optically produce in educated humans the same signals as a “normal” room. (Some evidence suggests that children under 5 years of age are not taken in by this illusion.”

Something very amusing and instructive happens – something which may relate, I think, to UFOlogy and other “crazy” topics – if two men of the same size enter the cockeyed room and walk to opposite walls. What the brain “sees” is that one man “miraculously” grows taller, becomes a virtual giant, while the other man “shrinks” down to a dwarf. The brain, it seems, having classified the room as normal, stubbornly clings to that program, even at the cost of having to classify new signals into a virtually supernatural event. 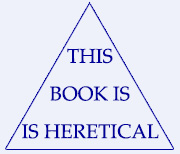 If you didn’t notice something a bit peculiar in that triangle, look again. If you still don’t see it, look a third time.