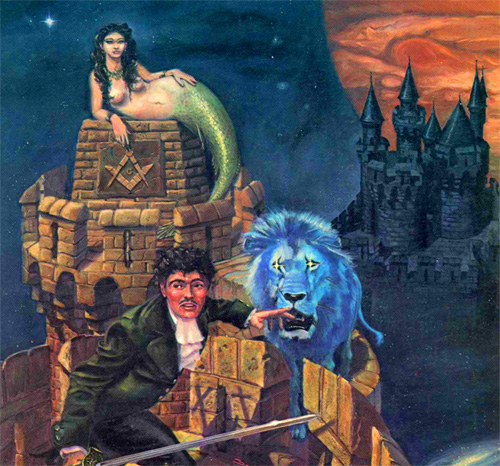 Moon was whistling as he sat up above in the driver’s chair, guiding the horse. Sir John thought of the coachman with compassion. He had undoubtedly come to England because of legal troubles in Ireland. The ruin of his right hand — the three missing fingernails — told a story Sir John could read without doubt, having been raised in Dublin himself, when his father was a judge there.

There was something wrong with Moon’s right eye, too. It would not quite focus.

Sir John had voted for every bill Burke had proposed to relieve the Irish, to remove the hateful Penal Laws. They had been defeated by overwhelming majorities every time. I am appeasing my conscience, Sir John thought, by hiring an Irishman with a very probable rebel background.

Well, Moon was a good worker. It was not charity to keep him; he earned his wages.

Sir John remembered the first interview. “James Moon,” he had said. “That was probably Seamus Muadhen back in Meath, wasn’t it?” Moon, or Muadhen, claimed to come from Meath — which probably meant he came from Cork or Wexford or any place but Meath.

The look of astonishment on the lad’s face was pathetic, Sir John thought. He had obviously never met and never conceived of an Englishman who cared enough about Ireland to learn Gaelic.

He was still whistling as he galloped the horses. Sir John recognized the tune:

‘Twas early, early all in the spring
The birds did whistle and sweetly sing
Changing their notes from tree to tree
And the song they sang was of Ireland free

A rebel song. Sir John smiled. The boy was concentrating on the horses and did not realize what he was whistling, how incriminating it was.

We all give our away our secrets sooner or later, Sir John thought, and the fear came back as he applied that idea to himself.

Do I not always work for the humanitarian cause? Am I not trying to be a good husband? What is past is past. I have “put away all childish things.”

You are living a lie, another voice within him said. You know what you feel at the sight of certain special boys, boys with that brutal beauty that still attracts you.

It was at this point in his thoughts that Sir John Babcock saw what seemed to him at first one of God’s more Machiavellian tricks.

The object came down with a thunderous roar, it glowed like a ghost in a legend — or one of the faeries of Ireland — and it landed with an earsplitting crash only a short distance from the road.

An object that did not exist, according to the Royal Scientific Society. A myth that only peasants believed.

And it was still glowing.

“Moon!” Sir John shouted, banging on the roof of the coach with his walking stick in excitement. “Stop! Stop at once!”

The two men stood beside the coach, looking at the glowing rock. “You saw it come down?” Sir John asked, feeling like a character in a Walpole novel of demons.

“Aye, I saw it, sir.” Moon did not seem frightened at all. Of course, Sir John thought; he had detected evidence of some education in the lad previously.

“You are not afraid?”

“Afraid of a rock? Sure, it’s those human sons of bitches that scare me, when I am scared. Sir.”

Sir John had already gotten past thinking it was something God had thrown in his direction to teach him something about how inscrutable a Machiavellian deity could be. This was a natural phenomenon of some sort, and its connection with his own thoughts was only coincidental.

“I wish to dig it out of the earth,” Sir John said carefully, controlling his excitement. “It may have great scientific value. Let us see if it is still too hot to be touched.”

The two men walked across the field, and Sir John became increasingly aware that James Moon was not an ignorant peasant. He seemed to understand Sir John’s intellectual curiosity, and he showed no anxiety that faeries might leap out of the rock and transport them a hundred years backward or forward in time.

When they stood looking at the “thunderstone,” which had faded from bright yellow to mild grey already, Sir John felt exactly as he had during his four degrees of initiation into Freemasonry. The Royal Scientific Society was wrong about these objects; the peasants were right; everything was thereby thrown into doubt. This kind of awe and wonder had never come to him in any church, and yet he felt a sense of infinite mystery that was supposed to be what the Churches were all about.

Who was it who had said “There are no rocks in the sky; therefore rocks do not fall out of the sky”?

Well, there were rocks in the sky, and Sir John had seen one of them fall. What else is up there that we do not know? he wondered uneasily. The City of Heaven? That was superstition, but then, where did this Damned Thing fall from?

“Find a large branch,” he said intently. “Something to pry it loose from the earth.”

Sir John had devoted his life to an ideal of justice, which had been increasingly exacerbated by knowledge of how infuriatingly difficult it was to achieve, or even approximate, justice in this world. Now he felt a new passion; a commitment to pure truth such as the dedicated natural philosopher must feel. The Royal Scientific Society — indeed, all educated opinion — was wrong about thunderstones. Sir John had seen one fall with his own eyes; it was not some peasant’s tale. It was his duty to inform the scientific community. He had, at that moment, only a dim premonition that this might be an unpopular undertaking. That did not matter of course; he had been vilified considerably for some of his positions in Parliament — his defense of the American colonists, his opposition to slavery, his efforts to remove the Penal Laws and restore religious liberty. He was not afraid of public opinion. Besides, he had his rock, and he was sure nobody could argue away the existence of so tangible an object.

Seamus Muadhen was hesitating, as he had been hesitating for months. It was only partly that Babcock was not the villain Seamus had imagined in the interrogation room in Dun Laoghaire; mostly he had delayed because he lacked the stomach for this job. He had told himself, many times, that he was being clever and crafty; waiting for the right time, the time when he could do it and escape without suspicion. That had all been lies; he had had many opportunities. Opportunities lost, gone, keened only by the wild wicked wind.

It was easy to commit murder in imagination, Seamus had learned. There was the man you hated, the man who deserved to die; and there you were, alone with him. You shot, or you stabbed, or you clubbed him, and the work was done. But now, in the real world, it was more complicated; the man had a wife for instance, and you could not stop yourself from thinking of the look in her eyes when she heard the news; and she was pregnant, and you thought of the unborn child; and you learned, the way servants learn things, that she, Lady Babcock, had a brother who was half-mad because of a wound from a duel, and you wondered what more violence coming into her life might do to her mind….

The plain fact is, Seamus thought in the dar, coming up behind Sir John, the great conquerors and empire builders like the English are people who have learned not to think that way. Here is a man who must die, they think: and they kill him: and there is an end. And the revolutionaries who succeed can only think one step at a time: here is a man who must die, so we kill him. Those of us who think of the next step, and the step beyond, Seamus realized, are not the ones who make history. We are its passive victims. Just because we have too much fooken imagination. If a prime minister anywhere in Europe had the kind of mind I have, Seamus thought miserably, he would never sign a mobilization order for an army: and there would be no history.

History is made by men who do not think of the ultimate effects of what they are doing.